Browse > Home / Atheism / Is Atheism a Belief or a Lack of Belief?

Is Atheism a Belief or a Lack of Belief?

by Trent Horn
Filed under Atheism 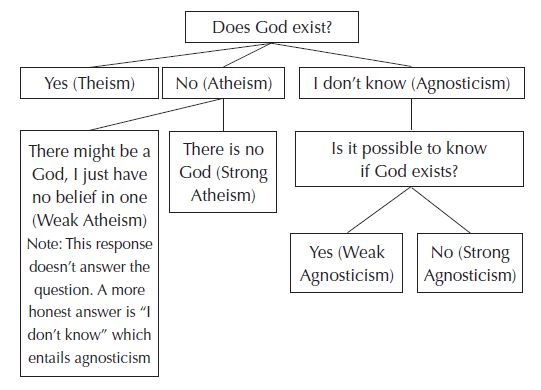 When asked to prove atheism is true, many atheists say that they don’t have to prove anything. They say atheism is not “belief there is no God” but merely “no belief in a God.” Atheism is defined in this context as a “lack of belief” in God, and if Catholics can’t prove God exists, then a person is justified in being an atheist. But the problem with defining atheism as simply “the lack of belief in God” is that there are already another group of people who fall under that definition: agnostics.

Agnosticism (from the Greek word for knowledge, gnosis) is the position that a person cannot know if God exists. A strong agnostic is someone like skeptic Michael Shermer, who claims that no one is able to know if God exists. He writes, “I once saw a bumper sticker that read “Militant agnostic: I don’t know and you don’t either.” This is my position on God’s existence: I don’t know and you don’t either.”1

A weak agnostic merely claims that while he doesn’t know if God exists, it is possible that someone else may know. Agnosticism and weak atheism are very similar in that both groups claim to be “without belief in God.”2

Pope Benedict XVI spoke sympathetically of such people in a 2011 address:

"In addition to the two phenomena of religion and anti-religion, a further basic orientation is found in the growing world of agnosticism: people to whom the gift of faith has not been given, but who are nevertheless on the lookout for truth, searching for God. Such people do not simply assert: ‘There is no God.’ They suffer from his absence and yet are inwardly making their way towards him, inasmuch as they seek truth and goodness. They are ‘pilgrims of truth, pilgrims of peace.’"

A Difference Without a Distinction

Because agnosticism seems more open-minded than atheism, many atheists are more apt to describe themselves like agnostics, who likewise have “no belief in a God,” even though they call themselves “atheist.” They say that an atheist is just a person who lacks a belief in God but is open to being proven wrong. But saying you lack a belief in God no more answers the question, “Does God exist?” than saying you lack a belief in aliens answers the question, “Do aliens exist?”

This is just agnosticism under a different name.

For example, can we say agnosticism is true? We can’t, because agnostics make no claims about the world; they just describe how they feel about a fact in the world (the existence of God). Likewise, if atheists want us to believe that atheism is true, then they must make a claim about the world and show that what they lack a belief in—God—does not exist.

For all we know, he could have committed the crime, but we just can’t prove it. Certain kinds of evidence, like an air-tight alibi, can show the defendant is innocent. But it is the responsibility of the defense to present that evidence.

Likewise, even if the theist isn’t able to make his case that God exists that doesn’t show God does not exist and therefore that atheism is true. As atheists Austin Dacey and Lewis Vaughn write:

“What if these arguments purporting to establish that God exists are failures? That is, what if they offer no justification for theistic belief? Must we then conclude that God does not exist? No. Lack of supporting reasons or evidence for a proposition does not show that the proposition is false.”3

If he wants to demonstrate that atheism is true, an atheist would have to provide additional evidence that there is no God just as a defense attorney would have to provide further evidence to show his client is innocent as opposed to being just “not guilty.” He can’t simply say the arguments for the existence of God are failures and then rest his case.