Browse > Home / Morality, Sexuality / Do You Need God to Know That Abortion is Wrong?

Do You Need God to Know That Abortion is Wrong? The New Republic’s latest contribution to the abortion debate is remarkable, in that, despite getting virtually everything it says factually wrong, it still raises an interesting problem for pro-choicers and atheists. Here’s the Twitter teaser to the piece that started it all:

How the anti-choice platform is fighting to stay alive: http://t.co/m8kuGANs2Q pic.twitter.com/fxTeRyj444

According to the author of this piece, New Republic senior editor Jamil Smith, (1) the pro-life movement is struggling to survive; (2) the pro-life movement is fueled by ignorance; and (3) pro-lifers are forced to resort to “because God” in defense of their views. Each of these views is demonstrably false, but the third point actually highlights a potentially devastating problem for pro-choicers and atheists.

Is the Pro-Life Movement Dying or Gaining Ground?

Unlike The New Republic, the pro-life movement isn’t struggling to survive. But you don’t have to take my word for that. Just look at the most recent Gallup poll data on Americans’ positions on abortion: Here’s how Gallup summarized the overall trends in 2012:

"Gallup began asking Americans to define themselves as pro-choice or pro-life on abortion in 1995, and since then, identification with the labels has shifted from a wide lead for the pro-choice position in the mid-1990s, to a generally narrower lead for 'pro-choice' — from 1998 through 2008 — to a close division between the two positions since 2009. However, in the last period, Gallup has found the pro-life position significantly ahead on two occasions, once in May 2009 and again today [2012]. It remains to be seen whether the pro-life spike found this month proves temporary, as it did in 2009, or is sustained for some period."

It noted further that “the decline in Americans’ self-identification as 'pro-choice' is seen across the three U.S. political groups.” So the last two decades have seen a shift for pro-choicers having a wide lead over pro-lifers to pro-choicers having a narrow lead over pro-lifers, to the present, in which the lead is hotly contested. And from this Smith concludes that the pro-life movement is dying? The data shows the opposite: the pro-life movement is not surviving, it’s gaining ground.

More likely, the problem is that Smith is ignorant: Gallup has also found that most Americans mistakenly believe that a majority of America is pro-choice, and that political moderates and pro-choicers are most likely to get this wrong. So Smith’s description of a political movement that is losing ground but remaining ignorantly deluded is an apt one: he’s just applied it to the wrong side of the debate.

But let’s talk about ignorance and science. Here’s a larger excerpt from Smith’s piece:

"The anti-choice platform survives by propagating one fundamentally flawed truth above all: Conservative politicians know more about medicine than doctors do, because God. That is an explanation that relies upon the ignorance of the persuaded and coerced.
Ignorance—both the kind they embrace and the kind they relentlessly promote—has always been a primary tool for conservatives in their battle against reproductive choice. […] The more of us caught up in speculating when life actually begins and questioning the rights of the fetus, the better."

This is a call to stop asking when life begins and to stop questioning whether or not the fetus has human rights, couched in Orwellian terms as a war on ignorance. Those rascally pro-lifers are making us ignorant by encouraging us to think about unpleasant questions! 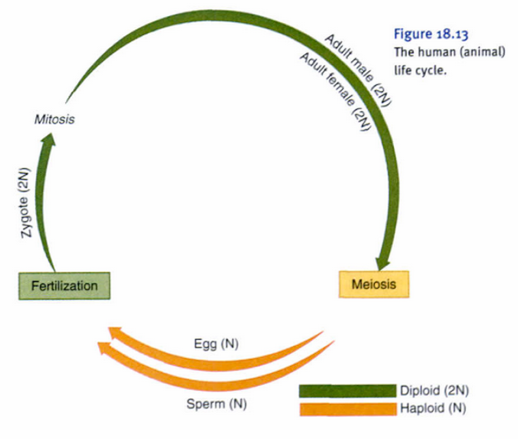 The pro-life movement is actually very much pro-science, and science is on the pro-life side of the question of when life begins. This is from Sandra Alter’s Biology: Understanding Life, a collegiate-level biology textbook for non-majors. It explains the birds and bees for anyone still confused about how reproduction works

"To illustrate, look at the human life cycle diagrammed in Figure 18.13, which is representative of all animal life cycles. A life cycle is the progression of stages an organism passes through from its conception until it conceives another similar organism. The diploid zygote in the diagram represents that part of the life cycle during which the fusion of gametes, or sex cells, from a male and a female of the same species have produced a new individual. The female gamete is the egg, and the male gamete is the sperm.

After a person (or other animal) grows to sexual maturity, the sex organs begin to produce gametes by a type of cell division called meiosis (my-OH-sis). During meiosis, one parent cell produces four sex cells, but these cells are not identical to the parent cell. Each sex cell is haploid; that is, it contains half the amount of hereditary material of the original parent cell. It is a single set of genetic information – one of each chromosome. Because of this reduction in chromosome number, one sex cell from each of two parent organisms can join together in a process called fertilization to form the first cell of a new individual that has a full complement of hereditary material. This new cell is diploid. That is, it contains double the haploid amount – a double set of the genetic information, or two of each chromosome. This type of reproduction, which involves the fusion of gametes to produce the first cell of a new individual, is called sexual reproduction."

New life begins the same way in all animals, not just humans. Two gametes, sperm and egg, fuse to form a diploid. This diploid isn’t part of the mother or the father: it’s a genetically-distinct individual member of the species. That’s how we get new birds, new bees, and new boys and girls. On this point, there’s just no serious scientific question. Scientifically literate people don’t wonder, for example, if chicks are alive (or individuated) before they emerge from their eggs. So science teaches that fertilization produces new beings. In the case of humans, the fusion of sperm and egg produces a new human being.

But this doesn’t answer every question in the abortion debate, which is where we get to the most (inadvertently) interesting part of Smith’s piece.

Is Abortion Only Wrong “Because [of] God” or Can Atheists Know It, Too?

That’s an interesting claim for a few reasons. First, because he doesn’t actually quote a single person citing religion in defense of their position: he just ignores the actual reasons given, saying that their reasons are really “because God.” Second, because (Gallup again): “Americans who profess no religious identity are the most heavily pro-choice, at 80%, with 15% calling themselves pro-life.” How would Smith explain those 15%? Are they just pro-life “because God”? Smith claims that the pro-life justification for its position is simply “because of God.” Well, actually he says that it’s “because God,” and that this is why “conservative politicians” claim to know more about medicine than doctors, but that’s a bit of an incoherent mess. What he’s driving at, as near as I can tell, is that opposition to abortion can only be due to religious reasons.

But the third reason is that if Smith is right, this is a damning critique of atheism.

The pro-life argument is simple: (1) human beings are alive from the moment of fertilization, and (2) it is morally wrong (and ought to be illegal) to intentionally kill innocent human beings. The first point is a scientific one. The second is a moral and legal one, one that science can’t answer. You don’t find human rights under a microscope, and there’s no experiment capable of proving that murder is wrong.

So here’s why I say that Smiths’ piece ends up being an inadvertent contribution to the broader debate on abortion, as well as on religion. I frequently see two types of pieces from secular writers:

Those two positions can’t both be right, so which is it?If it’s #1, then pro-choicers need to abandon the “because God” strawman. If it’s #2, then atheism is morally terrifying (and if murder is always wrong, then atheism is false).

In fact, atheists don’t agree on this question. Broadly speaking, they fall into three camps. First, there are people like Sam Harris, who claims that science can somehow prove morality, that an ought can be derived from an is without God or teleology. Second, there are those like Jean-Paul Sartre, who acknowledge that apart from God, everything is morally permissible as morality is reduced to a human invention:

"The existentialist, on the contrary, finds it extremely embarrassing that God does not exist, for there disappears with Him all possibility of finding values in an intelligible heaven. There can no longer be any good a priori, since there is no infinite and perfect consciousness to think it. It is nowhere written that “the good” exists, that one must be honest or must not lie, since we are now upon the plane where there are only men. Dostoevsky once wrote: 'If God did not exist, everything would be permitted'; and that, for existentialism, is the starting point. Everything is indeed permitted if God does not exist, and man is in consequence forlorn, for he cannot find anything to depend upon either within or outside himself. He discovers forthwith, that he is without excuse. [….]

No one can tell what the painting of tomorrow will be like; one cannot judge a painting until it is done. What has that to do with morality? We are in the same creative situation. We never speak of a work of art as irresponsible; when we are discussing a canvas by Picasso, we understand very well that the composition became what it is at the time when he was painting it, and that his works are part and parcel of his entire life. It is the same upon the plane of morality.There is this in common between art and morality, that in both we have to do with creation and invention. We cannot decide a priori what it is that should be done."

The third group of atheists simply try to have la botte piena e la moglie ubriaca (“the barrel full and the wife drunk,” Italy’s colorful take on “to have your cake and eat it, too”). But this third position isn’t tenable.

So in spite of Smith’s gross ignorance of the statistical growth of the pro-life movement, the scientific origins of human beings, and the actual arguments used by pro-lifers, he’s stumbled into something resembling an interesting point. He (apparently) thinks that only God can coherently undergird the opposition to murdering unborn children. Non-believers and pro-choicers, is he right?