The March for Scientism

by Carl Olson
Filed under Science 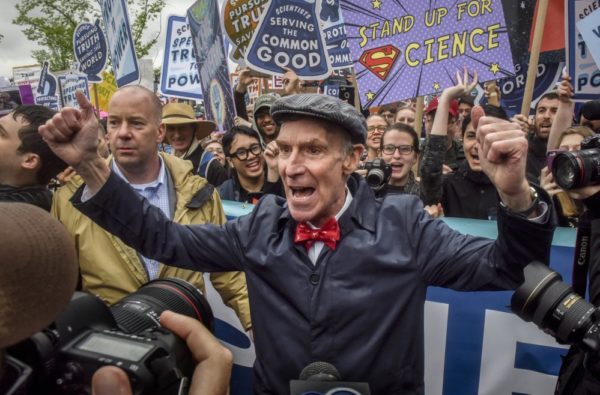 Back in the early 1840s, John Henry Newman observed that physical philosophers—that is, scientists—"are ever inquiring whence things are, not why; referring them to nature, not to mind; and thus they tend to make a system a substitute for a God..." The "tending" has been, as they say, trending ever since. About a hundred years later, in 1948, Fulton Sheen remarked in his outstanding study Philosophy of Religion, that:

Lest it be thought that Sheen was anti-science or the enemy of scientists, consider his remark, from his 1928 book Religion Without God, that the "rock-surenes of 'Science' does not exist in the mind of the scientists themselves, although it does love and throb in the minds of publicists and propagandists. Scientists themselves disclaim they possess ultimate truth; rather they look upon it as a horizon toward which they are proceeding." Sheen was indicating that when a scientist begins to make metaphysical or philosophical assertions, he is no longer speaking as a scientist. Of course, a great number of famous scientists—Richard Dawkins and Stephen Hawking come to mind immediately—have used their scientific reputations in order to wade into waters that are better described as ideological and polemical. And even political.

All of those elements were obvious in the "March for Science" event that took place last week. I was blissfully unaware of the event until a friend sent a link to the local newspaper's coverage of the March for Science in Eugene, which featured some 1,500 or so true believers. And I don't say "true believers" with any sarcasm or snarkiness; on the contrary:

“We teach science and we believe in science,” said Carrie Ann Naumoff, a fifth-grade teacher at Edison Elementary in Eugene. “We’re concerned that science is being blocked and interrupted. We’re concerned about the EPA and concerned that ­scientists are being harassed for what they’re publishing. We want our students to have access to real information.”

"We believe in science." Whatever does that mean? What if the seventh-grade home-ec teacher (if such a thing still exists) exclaimed, "We believe in the culinary arts", or the 10th-grade French teacher solemnly explained, "We believe in language." Huh? But we can guess what Ms. Naumoff means: she and the enlightened educating class are the guardians of science, which is the one, true source of truth and goodness, leading us into a future of bliss. However, such a belief is not really about scientific research and fact, but about a particular ideological perspective, generally called scientism, which is not about following physical evidence where it might lead, but flattening all of reality into the narrow confines of materialist proofs and premises.

Dr. Austin L. Hughes, a professor of Biological Sciences at the University of South Carolina, described it well in an 2012 essay titled "The Folly of Scientism":

Central to scientism is the grabbing of nearly the entire territory of what were once considered questions that properly belong to philosophy. Scientism takes science to be not only better than philosophy at answering such questions, but the only means of answering them. For most of those who dabble in scientism, this shift is unacknowledged, and may not even be recognized. But for others, it is explicit.

Writing about the recent March for Science event—which was directly inspired by the hyper-political Women's March in January—Eric Metaxas & G. Shane Morris observe:

There was a time when “science” meant the systematic pursuit of knowledge through experimentation and observation. But it’s rapidly becoming a synonym for progressive politics and materialist philosophy.

To be labeled a “science-denier” in 2017 often just means you’ve upset someone who insists on teaching strict, Darwinian orthodoxy in schools, or who advocates particular climate legislation, or who supports ethically fraught research on embryos.

In contrast, being “pro-science” has become a shibboleth for supporting progressive ideology. Think of a recent ad by National Geographic with the caption, “Stand behind the facts. Stand with science. Stand for the planet.” But just weeks prior, National Geographic had run a cover depicting a nine-year-old boy dressed as a girl. Because, as we know, they stand with science.

But if there were ever going to be a ceremony inaugurating this new and useless definition of science, it’s got to be last weekend’s “March for Science” in the nation’s capital, co-chaired by Bill Nye, “the science guy.” Nye, a children’s TV host from the nineties with no formal training as a scientist, has recaptured the spotlight with his videos on climate change, abortion, women’s rights, and other topics.

To say his arguments in some of these videos are embarrassing is being kind. For instance, in one odd and rambling speech promoting abortion, Nye claimed that because many lives end through natural causes before they leave the womb that it’s okay for us to kill the unborn ourselves. That’s like saying it’s okay to kill adults, because millions die of natural causes. That does not stop Nye’s supporters from honoring him as a champion of science.

But, again, Nye and his supporters are not really about science, but about scientism; they are not interested so much in limited, focused empirical data, but broad, sweeping claims that many would associate only with the stereotypical wild-eyed fundamentalist. Yet it's fitting, since scientism is the result of a hijacked and confused religious impulse. One serious problem, as Sheen pointed out in 1948, was that if "philosophy"—which is not much taught, learned, or loved by most Americans—"can no longer judge science, then science is its own justification; it can be used as well for purposes of destruction as for human betterment, and no one can pass judgment on its morality." Nye is a perfect example of this fundamentalist scientism, as evidenced in an op-ed he wrote for CNN.com in which he states:

With more than 600 marches taking place around the world, we conveyed that science is political, not partisan, and science should shape our policies. Although it is the means by which humankind discovers objective truths in nature, science is and has always been political.

Which, of course, is nonsensical and irrational, just like Nye's support for abortion. The editors of The Register-Guard, perhaps mildly taken aback or even embarrassed by the creed of Ms. Naumoff and company, sought to strike a more agnostic note, stating:

The march will have served a useful purpose if it succeeds in getting Americans, including the Trump administration, to think about what science is, and what it isn’t. Science isn’t truth, and it isn’t something people should believe in. It is a method for zeroing in on the truth by testing possibilities and gathering evidence.

Hughes, in concluding his essays, offers this very sober note of warning:

Advocates of scientism today claim the sole mantle of rationality, frequently equating science with reason itself. Yet it seems the very antithesis of reason to insist that science can do what it cannot, or even that it has done what it demonstrably has not. As a scientist, I would never deny that scientific discoveries can have important implications for metaphysics, epistemology, and ethics, and that everyone interested in these topics needs to be scientifically literate. But the claim that science and science alone can answer longstanding questions in these fields gives rise to countless problems.

In contrast to reason, a defining characteristic of superstition is the stubborn insistence that something — a fetish, an amulet, a pack of Tarot cards — has powers which no evidence supports. From this perspective, scientism appears to have as much in common with superstition as it does with properly conducted scientific research. Scientism claims that science has already resolved questions that are inherently beyond its ability to answer.

Of all the fads and foibles in the long history of human credulity, scientism in all its varied guises — from fanciful cosmology to evolutionary epistemology and ethics — seems among the more dangerous, both because it pretends to be something very different from what it really is and because it has been accorded widespread and uncritical adherence.

Around the same time that Sheen was writing Philosophy of Religion, a young, agnostic medical student named Walker Percy discovered—through debilitating illness and then deep reading of Christian philosophy—that science, which he once viewed as the final word on everything, could not answer the ultimate questions. Modern science, he later wrote (after becoming Catholic), "is itself radically incoherent, not when it seeks to understand things and subhuman organisms and the cosmos itself, but when it seeks to understand man, not man’s physiology or neurology or his bloodstream, but man qua man, man when he is peculiarly human. In short, the sciences of man are incoherent."

And in a self-interview, "Questions They Never Asked Me," Percy put it this way:

This life is much too much trouble, far too strange, to arrive at the end of it and then be asked what you make of it and have to answer, ‘Scientific humanism.’ That won’t do. A poor show. Life is a mystery, love is a delight. Therefore, I take it as axiomatic that one should settle for nothing less than the infinite mystery and infinite delight; i.e., God.

We can either have an earth-bound and cramped system, or Truth Himself. The former offers trendy marches and Bill Nye rants; the latter offers infinite mystery and infinite delight.